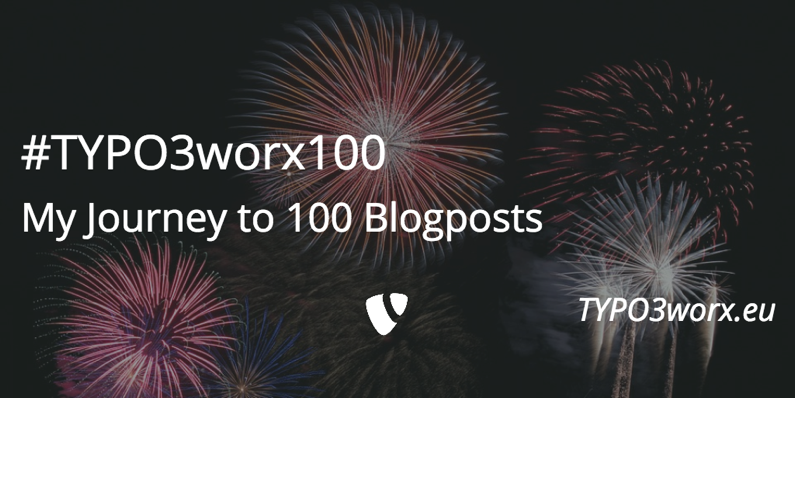 Wohoo! This is my 100th article about on this blog. It is time to look back onto the “journey”, talk about the motivations and what you can expect in the future.

I started back in October 2014. It was the time when the discussion was about “The German Prison of TYPO3”. As I already had a blog about TYPO3 and thought about writing more posts, but there I was writing in my mother tongue: german. I wanted to set a sign and started this one in english and dropped the other one completely.

Why I use WordPress and not TYPO3?

First and foremost WordPress is a well-known blogging software, which is used by many, many other sites and with with I had already some experience. On the other hand, back then the distributions and packages were not that good as of today. So I would have had to develop a layout myself. But I as a blogger, I want to write about TYPO3 and not to develop a design.

I found a basic WP theme, which fitted quite good and was set up in a couple of hours. So the decision was quite clear.

In 2015 I wrote an article, whenever I felt about fine about it., resulting in very irregular timed posts. In this time may work moved more and more into project management and customer support, but I still was interested in the technical side of TYPO3. Additionally I did not want “to loose the roots”.

At the end of 2015 I wanted to become an “iron blogger”. An iron blogger is a person whose goal is to publish one post per week. I often failed this goal in the early summer, especially due to a longer illness.

After that I switched back to a “normal” developer role … a step I do not regret in any way. It was one of the best decisions I took in my life. Due to this decision also my energy came back and later that year the frequency became better. My satisfaction though publishing the posts was very high.

I wanted to drive that further and tried to publish two posts a week. This worked only for some time, resulting in six to seven posts per month. After that I was quite exhausted, as I write in my spare time and have family and other hobbies too.

In that time I got more and more frustrated about WordPress. I wrote my posts in Evernote. Once they were ready, I copied the content into the single RTE field in WP … and started formatting. This step cost me about 1.5 to 2 hours per post and was very unsatisfying.

Fortunately I found apps, which are able to publish markdown directly to WordPress. There are several of this type. First I used “Ulysses”. It has a nice clean UI, which I liked very much. But within the first year of use they moved the licensing to a subscription model. After that change, I now use “MWeb”. In the publishing process, both have there strengths and weaknesses. But that eases the publishing and formatting very much.

In mid 2017 I decided to go for a new WordPress theme, which is responsive and looks good on every device. I a premium template for journals made by ElegantThemes. It comes with a page builder, which adds much “noise”, like woo-commerce integration. I am quite satisfied with the visual part, but from the performance perspective and backend usability, it is far too much. All steps I took to increase performance with caching did not really succeed. And optimizing this template with a child template (aka removing features and unneeded CSS and JS) is simply not possible… at least for me as a WP noob.

With this step I got also a ver nice logo for the blog. It was created by my colleague Dirk Döring (@faulancr). Many thanks for that!

The amount of time, that I invest in this blog, is quite high. I need about six to eight hours for each post plus some hours per month for administration of the blog. So I thought: Why not try to monetize at least some of the time.

So I started with Patreon and invited you, my readers to pledge a small amount. And I was astonished how fast a decent number of sponsors stepped up. Currently 24 readers and agencies are sponsoring on a regular basis.

Thank you very much for that! Your persistent support is really rewarding.

The 100th post is also a good point for me, to look into the future and to ask myself about the future: What do I wish for the blog? What are my goals?

My goal is to publish three posts a month on a continuing basis. My wish is to write four or more, but that’s hard achieve with work, family and other hobbies and engagements. Maybe I will get this “fixed”, if I reduce the average length of an article and split some topics into several parts … I don’t know yet.

From the technical point of view, I would really like to use TYPO3 as a basis for the blog. The reason is in the limitation, that comes with a “one-size-fits-all” theme. All that stuff, I miss, can I customize with TYPO3, because I know the system from inside to outside.

On the other hand I like the (more or less) distraction free writing in an markdown editor together with the “publishing to WordPress” function.

I think, I will set up some kind of prototype to check this out.

Last but not least: I have a dream. My dream is to host a monthly TYPO3 audio podcast. The topics should cover “everything” around TYPO3: TYPO3 tech topics, supporting technologies, community insights and a news block, about what happened in the last month. The length should be around 45 minutes and would be mostly an interview format.

What do you think? Would you subscribe and hear that?

When I started the blog, I did not think about where it would take me … writing over one hundred posts, getting well known in the community, speaking at the TYPO3 Developer Days and the Certifuncation, thinking about a podcast, … I am really happy about that! And I hope that you find the one or the other post helpful.

I want to thank my supporters, who make this blog post possible. If you also appreciate my blog and want to support me, you can say “Thank You!”. Find out the possibilities here:

I found the blog post image on pixabay. It was published by nidan under the CC0 Creative Commons License. It was modified by myself using pablo on buffer.