Shortly after branching off the new TYPO3 version 8, I started a written interview with Benni Mack and Mathias Schreiber. Benni is the the team lead of the TYPO3 core team and Mathias is the product owner of TYPO3 CMS. Please read on for the complete interview and see what we can expect from the next year.

Marcus: Hi Mathias. Hi Benni. Thank you for your time to speak about the next weeks and months of TYPO3 development. But let me start with another question: I can imagine the last year was quite exhausting. All efforts went in delivering the great release 7LTS. Did you manage to have some days / weeks off together with your family? If yes, what was the destination?

Mathias: I managed to get a few days off over christmas to spend with my wife’s family plus some additional days by being sick. But I spent quite some time on preparing a viable scenario for a TYPO3 Inc. as well as fiddling around with the budget for 2016.

Benni: Sure, family is key. We all know, however, that TYPO3 work never stops – preparing everything for the next release cycle is also part of leisure time for me. While others do puzzles or build miniature train systems in their basement, working on the TYPO3 Core is my hobby.

Marcus: After some weeks and some fixes the maintenance branch for TYPO3 7LTS was branched off. So it is possible to merge features again. If I look in the git commit log, the most recent activities focus on cleanup: Remove deprecated code, unused functions and things like that.
If the way is paved for new features: Is there already a big picture? Is there a claim for the next LTS as it was with the 7LTS „Embrace and Innovate“?

Benni: On every first major release, the main work is to remove the “legacy layer” that we provided for the last LTS version in order to move forward. Cleaning up is important to streamline the code structure. With the changes in the last few months and the move to the coding standard PSR-2 new developers should feel more comfortable than before to dive into the whole TYPO3 project and the TYPO3 Core.

The big picture for TYPO3 v8 has two main focus areas. One being truly the making life easier for editors – and you can imagine that there is loads of improvements on how web applications work today compared to the way ten years ago, when a lot of the usability concepts were introduced. The “Embrace and Innovate” philosophy continues here – we still have a lot of technical debt that we not just replace with new technology (like the removal of the ExtJS library) but also look on how we can advance to make the TYPO3 Backend behave more intuitive like a real web application, but also how editors approach the TYPO3 Backend, and the frontend like the Admin Panel and Frontend Editing.

The other main focus area is making TYPO3 ready out of the box for cloud hosters. Sure, there are the obvious parts that we need to tackle when it comes to fully automated and distributed systems, which are not just relevant for cloud infrastructures, but also having TYPO3 work properly with other PHP systems. One is surely the shift towards Doctrine DBAL when it comes to database abstraction, instead of using our own hand-made database abstraction layer, and many more technical parts under the hood. Additionally, this part means also a lot of work and testing with cloud hosters.

We all put this work under the topic of “TYPO3 v8 – Miles Ahead” – as this is our goal for v8 – being far further than we’re now, and also ahead of our competition again.

Marcus: What is your imagination with the claim „ Miles Ahead“? What are the three or five keywords that are connected to this claim? And what do they mean?

Benni: As mentioned, we’re not just miles ahead from where we’re now – we’re gonna be up in the clouds, but far further in what people expect from TYPO3 now, may it be for DevOps, Administrators, Integrators or Editors. We imagine that we’re driving the product further. The base was set with TYPO3 CMS 7, and we’re continue to do so. “Embrace & Innovate” pretty much sums up the philosophy we strive for. If it fits, it fits.

Marcus: In my view the sprint releases are quite successful concept as it shows to the public that something more is going on and that there is continuous activity. Do you already have a roadmap with planned dates? When will the first sprint release leave the workbench?

Benni: We’re currently tackling the groundwork for the bigger parts that will be handled in TYPO3 v8 – like how we deal with files and assets in general, and how we want to handle database connections in the future – going even further when it comes to de-facto standards in PHP. You can probably guess that we have the feature list from the Agency Meetups and the rest of the community, and the improvements we see ourselves inside the core, that we’re forming into sprint releases. You can expect a first sprint release for v8 within the next 4 weeks.

Mathias: Well, we do have an internal timeline, but we are still moving some of the near dates around. This is mostly due to the fact that we had to wait to get our codesprint locations and the budget confirmed, then negotiate with camps and other events etc. – the usual organizational stuff.
Also we success of v7 binds people – simply because they want to update to the new version. My personal lesson from this is that after each big release there will be a slight drop in activity because after all most people need to take the time to update their sites.
And of course, this year we released pretty close to christmas which also impacts activity a bit. But there are already two code sprints done in 2016 and a lot more will follow.

Marcus: The last two years there have been a series of TYPO3 agency meetups in cities all over europe. You attended some of them. Which is the most important idea you picked up at these meetings? How will it find its way into the TYPO3 core?

Mathias: Most wishes came from areas that are not directly related to coding. So wishes we for example to get TYPO3.org freshened up or to do more in terms of visibility in print magazines.
So I guess people are pretty happy with what we do core-wise.
But impulses are often identified on a second level.
Let me give you an example: We are putting a LOT of effort into making multi-language handling more consistent and easier to understand – even though nobody asked for it. It’s the little sidenotes you get on those meetings when you talk to the people.
Some wish for multi-language to be “easier”.
Ok, but what exactly does “easier” mean here?
So we spent quite some time talking to people and tried to identify the root cause so we can then take it on in the core team.

Benni: Additionally, there are things that people want, but isn’t the core business of a CMS – like being a successful eCommerce software. So we’re actually focussing on providing better ways to integrate third-party application via APIs or directly via composer for these solutions.

Marcus: Which are the other ideas from T3AMD that will gain focus, if there are some more?

Mathias: TYPO3 Inc. I guess that is the biggest result from the AMDs and the General Assembly this year.

Marcus: Mathias, now I would like look on the future that is not that near. TYPO3 8LTS is planned for spring 2017. This is still a long way to go. In this timeframe there is the “potential end” of your role as product owner. You took it over in November 2014. As far as I know, you set yourself a period of 24 months in this role. Do you have any plans for the time after November 1st? Will you be still the product owner when TYPO3 8LTS will be released?

Mathias: Well, I don’t want to force another sabbatical year onto my partners in the company. In the end they made it possible for me to focus on TYPO3 on a fulltime basis.
But this is mainly what the TYPO3 Inc. is about.
So I guess most people will agree with me that it turned out to be a good thing to have people working on TYPO3 on a regular, full-time basis – ideally longer than a week.
So we need an entity that is able to allow for these positions – and not only for a product owner or CTO. Imagine what we could achieve with focussed marketing efforts or people that do nothing else all day than planning and running events.
TYPO3s history is full of great ideas that somewhat always stalled over time – simply because people were busy doing other stuff.
If we had really finished what someone promised he/she’d do TYPO3 would probably be a lot bigger than it already is.

Marcus: Thank you Mathias, Thank you Benni, for your time and efforts you invest here and into the whole TYPO3 project. I wish you all the success you could imagine. I hope we will meet again away from keyboard this year! 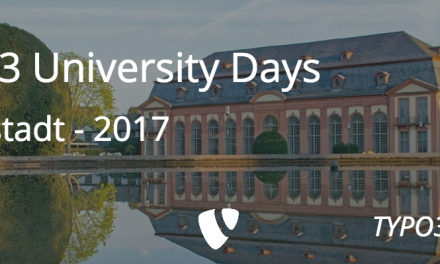