The TYPO3 University Days 2017 took place on September 28th and 29th in Darmstadt. About 120 people from universities and sponsors met at the Hochschule Darmstadt to discuss and work on TYPO3 related topics.

TYPO3 Academic Committee members of University of Applied Sciences Darmstadt organized and hosted the event the second time in a row.

Program of the TYPO3 University Days 2017

In the opening session the president of the university gave us a warm welcome to Darmstadt. He pointed out that it is a very successful “business-model” when universities are (net-)working together. He was happy to provide room for such an initiative like the TYPO3 University Days.

Report from the TYPO3 Academic Committee

After the greeting Daniel Fehrle (Uni Hohenheim) reported from the TYPO3 Academic Committee and what was achieved in the last year. They met five times (instead of the planned three times) to bring the things forward. After a survey within universities, the committee started to build a “University Package”, which aims to be a boilerplate for new university related website projects. 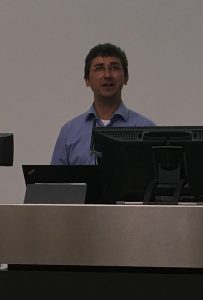 In the next weeks the committee will publish a list of extensions, which are recommended and should be used by universities. This  order to be able to join forces for further development.

Two work groups will push the topics “Speaking URLs” and “Shibboleth” forward. The “Speaking URL” workgroup will support the integration of this feature into the core. The first step is planned for integration into TYPO3 version 9.1. Shibboleth is a central authentication protocol and service used by many universities.

The Academic Membership was established in spring 2017. In the last five months 28 universities became a member of the TYPO3 Association with this special membership.

Other sessions and social event

The other sessions covered a wide range of topics:

The complete session list is available on the website of the University of Applied Sciences: https://www.h-da.de/typo3-ud/typo3-university-day-2017/tagung/. All sessions were recorded and will be published on the youtube channel of the university: https://www.youtube.com/channel/UCSYGMjIiutDZ8ZfueCXFIpw/feed.

At the evening between the two days there was a dinner at the Otto-Berndt-Hall directly in the city of Darmstadt. There was time for socializing, discussing topics and a form framework workshop on the stage for preparing the QA session on the next day.

About the TYPO3 Academic Committee

It was founded short after the last University Days in 2016. Their goals are to extend cooperation between universities and enable colleagues to share knowledge and experience through personal contacts.

Many universities in Europe are using TYPO3. In Germany over 60 percent are using the CMS. The TYPO3 Academic Committee will be their voice towards the community, the TYPO3 Association and the TYPO3 GmbH.

Another goal for the next years is to invite and include universities from not german-speaking-universities into their work. Current members are only from the D-A-CH region.

As the committee formed shortly after the last TYPO3 University Days, this time the first official election took place. In the starting session all candidates introduced themselves to the audience.

All 28 academic members were invited to vote for the members of the committee. At the final session the result of the voting was presented by Olivier Dobberkau, the president of the TYPO3 Association. Unfortunately I did not note who was elected and the page of the committee does not list the current result. If you are interested in the result, you should check the page regularly ;-)

The link between the TYPO3 Association and the Academic committee will be Petra Hasenau in the next years.

The locations for the next TYPO3 University Days are already set. The “Akademie der Wissenschaften” will organize the event in Mainz 2018. Also the University of Vienna raised their hands to take care of the event in 2019. Thanks for that.

If work at an university and would like to get in contact with other “academic” TYPO3 users, you can use the mailinglist / newsgroup and the Slack channel.

Also you should get an academic membership at the TYPO3 Association. This gives you a vote at the general assembly and enables you to vote for the TYPO3 Academic Committee: https://typo3.org/association/membership/academic-membership/

I really enjoyed these two days. They were driven by the TYPO3 claim “Inspire people to share”. It was a conference trying to shape the future for TYPO3 within the world of universities.

Most of the time there was only one track. The track was held in two lecture halls. Between each session you had to switch the room too, which was really great. At each switch you walked next to other people and talked to them. It was a cool idea to enforce mixing up.

Finally I want to thank the University of Applied Sciences Darmstadt, in person Ivonne Nordhausen and Michael Lang, for hosting and organizing this event. It was really great.

I found the blog post image on pixabay . It was published by Lapping under the CC0 public domain license. It was modified by myself using pablo on buffer.